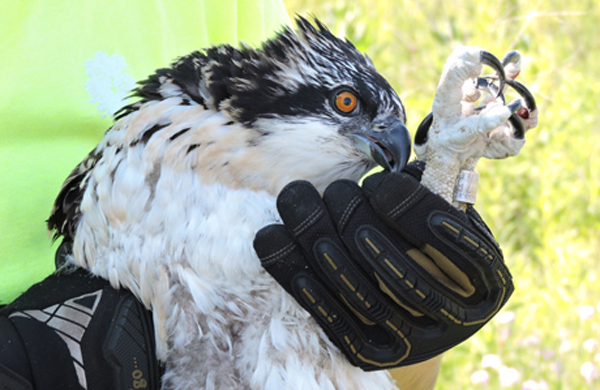 Friends' ongoing efforts to improve the reproductive success of osprey took an exciting turn in spring 2020 when it was discovered that the pair of osprey seen regularly on and in the vicinity of our nesting platform at the Beaubien Woods Boat Launch this year have chicks.

Osprey are a conservation success nationally yet are still endangered in Illinois.

Since 2014, Friends has been working with scientists from the Forest Preserves of Cook County to increase the number of nesting sites available to osprey along the river system north and south. Decades after the insecticide DDT, which put osprey on the endangered species list, was banned their numbers are increasing but habitat has not.

Friends pioneered a redesign of the traditional nesting platform which sits on top of an 80-foot pole to make them inviting to ospreys as nesting sites. The new design offsets the nest in order to allow researchers to more easily access the nest. Previous designs centered the nest on the pole. The first pole was installed in 2015, with three additional platforms installed in 2016 and a fifth pole installed in 2018. Our five platforms provide great access to fish in the river system and allow a 360° view which osprey prefer to protect their young chicks, such as the one pictured below, from predatory animals like the bald eagle. 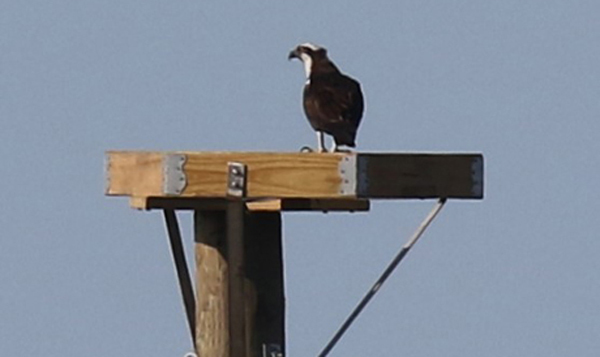 Make an Osprey Your Own

By symbolically adopting an osprey for a full year for yourself or as a gift, you will support Friends’ Wildlife Habitat Projects which restores or creates new habitat for native species like the osprey. Take a minute to learn more about our other wildlife habitat projects.

We offer different adoption package options to select. Your donation also includes a 12-month membership along with discounts on canoe trips, free McCormick Bridgehouse & Chicago River Museum membership, and tickets to our other events. 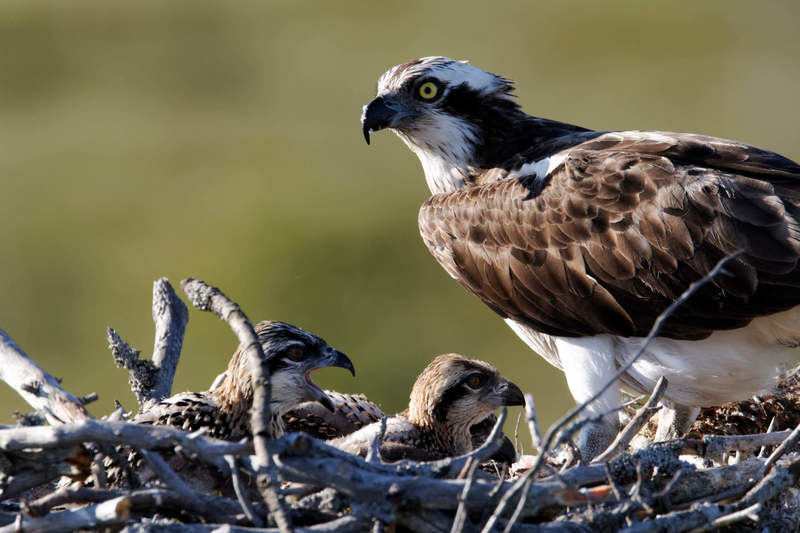 Want to adopt a channel catfish too? You’ll receive a discount of 20% if you also adopt both animals.

Osprey are found on five continents worldwide and four subspecies exist. Ospreys are migratory and travel long distances south—as far as Central and South America, where they overwinter until spring. Fish eating birds of prey such as the osprey serve as barometers to the ecology around them. Restoration of their habitat helps people too.

As with all birds of prey, the females are often larger than the males—some females have wingspans more than five feet, and weigh up to four pounds; males weigh in at two pounds. They have a characteristic black stripe through the eye and have charcoal and white feathers. In youth the eye is orange, in adulthood it becomes yellow.

Mated for life, osprey pairs are devoted parents and cooperate to hatch their young, feed them as they grow, and protect them from the elements until they leave the nest.

Young are full grown at six weeks and leave the nest at about eight to ten weeks of age taking their first flights. Like all raptors, ospreys have a high mortality rate in the first year of life. Ospreys mature after two years of age.

Ospreys rely almost entirely on fish for their diet, hence their nickname “fish hawk” – though officially their Latin name is Pandion haliaetus. Several adaptations allow for their expert fishing skills, including a reversible outer toe for grabbing fish, special pads on the feet for holding on to slippery fish, dislocatable shoulder joints, underwater vision, a fleshy nostril that closes and the ability to dive into the water at high speeds after fish—feet first. Their special feathers are good at shedding water quickly. 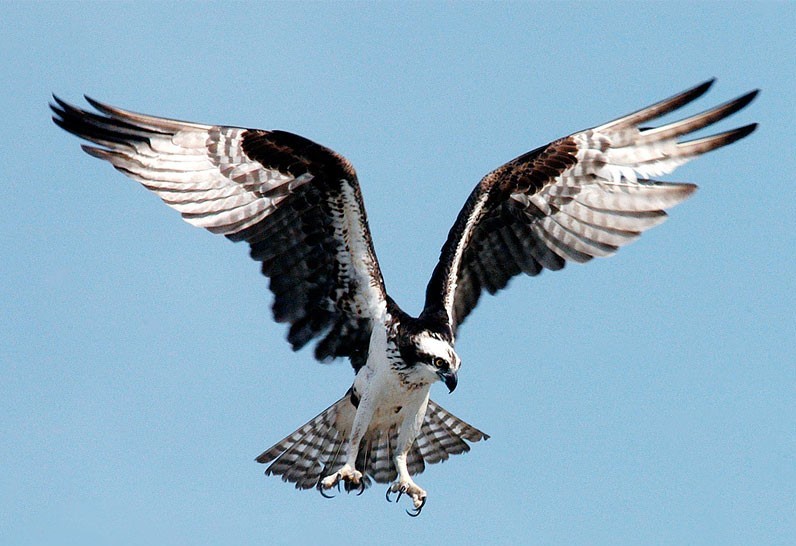