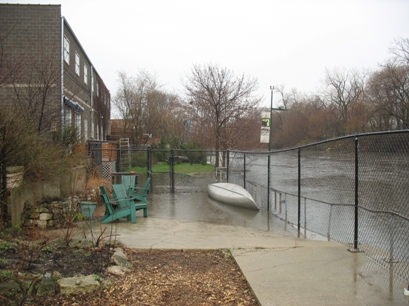 Photo coverage of the April 18, 2013 flooding highlights the importance of understanding the link between stormwater management and runoff and our sensitive river system. That day, expressways were closed, basements filled with water, and the Metropolitan Water Reclamation District opened the Chicago locks so that sewer-laden Chicago River full of trash could flow backwards into the lake.

Flooding, closures, overtaxed sewers, and lost productivity and property are caused by the fact that all of the rain had nowhere to go except into storm sewers, which don’t have the capacity for this much stormwater. Before we developed the region with buildings, roads, parking lots and alleys, the water used to be absorbed into the ground rather than running off on our hard surfaces and into pipes to our sewers.

At the forefront of the river’s recovery, Friends of the Chicago River has been advocating for accelerating the timeline to complete the Tunnel and Reservoir Plan and to implement a comprehensive green infrastructure plan, both of which are needed to address an event like April’s flooding and increased rainfall events in the future.

To document the impact of the torrential rains on the river and the region we asked members to send us photographs of the river or the flooding from wherever they were in the Chicago River watershed. Go to our Facebook page to see some photos that were sent to us. Keep sending photos, this is an important event that we want well documented for future discussions around stormwater management.