30 Mile Trek For Bass a Triumph 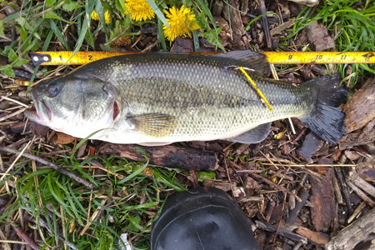 In October 2019, aquatic biologists from the Metropolitan Water Reclamation District (MWRD) tagged a largemouth bass in the Chicago River near Goose Island. Seven months later a fisherman released that same bass back into the Skokie Lagoons, a trek for the fish of close to 30 miles - upstream. A trip made possible by the leadership of Friends of the Chicago River who, along with the Illinois Department of Natural Resources (IDNR), spearheaded a dam removal effort that resulted in the removal of the North Branch Dam in Chicago and the Winnetka Road Dam in Winnetka.

Friends began our dam removal effort in 2002 after evaluation of fish species with IDNR showed that they were not evenly distributed throughout the system even though upstream habitat was superior. Friends assessed the dams on the system and recommended four for removal because either they no longer served a useful purpose or because they were enormously detrimental. All of the dams prevent the passage of riverine fishes and mussels, trap bedload material of sand and gravel, and are hazardous to people recreating on the water. The dam at River Park was removed in 2018 and Winnetka Road in 2015.

"Friends of the Chicago River has imagined fish swimming freely through the river since we first started the dam removal project with IDNR nearly two decades ago," said Margaret Frisbie, executive director of Friends of the Chicago River. "This largemouth bass is proof that if we invest in the Chicago River system wildlife will respond. It also represents our strong partnership with the Chicago Park District, Forest Preserves of Cook County, IDNR, MWRD, and the U.S. Army Corps (USACE). Visionary leadership, good stewardship, strong partnership and tenacity got it done. We could not be more thrilled."

Click here to watch a short video of the dam's removal.

The North Branch Dam at River Park was by far the most challenging of the four targeted. Built in 1910 as part of the construction of the North Shore Channel after the Chicago River was reversed, the dam proved over the years to be an insurmountable barrier to fish and other wildlife, recreational opportunities and water quality. The dam was at the confluence of the North Branch of the Chicago River and the North Shore Channel, between Foster Avenue to the north and Argyle Street to the south.

The Chicago Park District, MWRD, and USACE worked together to remove it and replace it with  riffles, step pools, cobbles and other gravels and sands that slow the flow of water and make it possible for fish to pass upstream. The dam removal project also includes the restoration of 29 acres of savannah habitat, 14 acres of riverbank, and five acres of aquatic beds by removing invasive species and planting native vegetation.