This timeline illustrates the environmental rulemaking process as it applies to water quality and discusses the most important agencies and partners involved, as well as key initiatives that impacted the process and improved water quality throughout the Chicago Area Waterway System (CAWS). 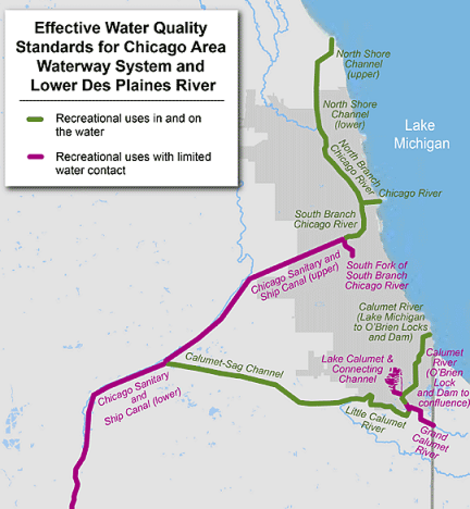 USEPA map of water-use designations throughout the CAWS.

The U.S. Clean Water Act guarantees “water quality which provides for the protection and propagation of fish, shellfish, and wildlife and provides for recreation in and on the water.” The language of “fishable/swimmable” provides the main mechanisms for improving water quality standards throughout the US: waterways must be clean enough for fish to thrive and people to swim in.

U.S. Congress passed the Clean Water Act (CWA) and set the goal of fishable and swimmable water quality for all U.S. waterways. The law also provides criteria and mechanisms for attainment, most notably, the CWA requires all pollutant discharges into U.S. waterways to obtain permits—including non-point source discharges such as stormwater. The National Pollution Discharge Elimination System (NPDES) has greatly improved water quality throughout U.S. waterways.

In order to comply with CWA water quality provisions, MWRD began the massive Tunnel and Reservoir Plan (TARP) to control sewage in the CAWS. Phase I of the project consisted of over 109 miles of tunnels and 2.3 billion gallons of stormwater storage.

U.S. Environmental Protection Agency assigns secondary-use designations to much of the CAWS. This requires minimum water quality standards that protect for limited wildlife and recreation.

Friends and partner organizations, Openlands and the Civic Federation, released Waterways for the Future, outlining how the Clean Water Act applies to the Chicago River, and how to use the law’s goals and legal protections for a cleaner waterway.

In order to adopt stricter standards for water quality, officials must first upgrade water use designations by conducting a Use Attainability Analysis (UAA). At the time, the CAWS secondary use designation only protected limited contact with the waterway, and the law provided only broad water quality protections. The UAA demonstrated that the current use designation and water quality standards were not protecting the users of the river, such as kayakers and, in some instances, swimmers. 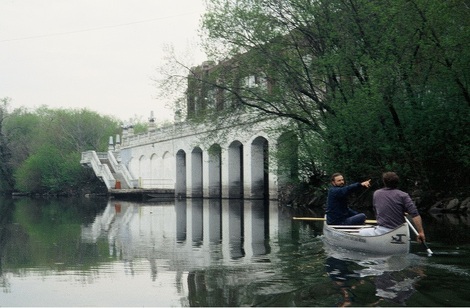 Canoers enjoy the waters near the Lawrence Avenue Pumping Station (2005).

U.S. EPA completes its review of IEPA’s new and revised water quality standards for the CAWS and accepts all water-use designation upgrades. The Metropolitan Water Reclamation District of Greater Chicago begins the process of adopting disinfection technologies at its wastewater treatment facilities.

In the summer of 2015, the Illinois Pollution Control Board (IPCB) accepted updated water quality standards for the Chicago River, guaranteeing a health water environment for people, plants, and animals. The IPCB accepted revised water use designations and standards for the CAWS. The following standards updates will have an immediate impact on the water quality of the Chicago River and the people, plants and wildlife that depend on it. Friends, along with its members and partner environmental organizations, advocated for these standards. The process began in 1999, making it the longest rulemaking procedure in Illinois history and resulted in significant improvements for temperature, dissolved oxygen, chlorides, as well as effluent disinfection at wastewater treatment facilities.

North Branch Dam at River Park is removed. Friends of the Chicago River’s goal to remove the dam at River Park began in 2000, an effort aimed at removing an insurmountable  barrier to fish and other wildlife, improving the overall ecology of the waterway and returning the site to its natural beauty. Read our blog post for more about the removal.