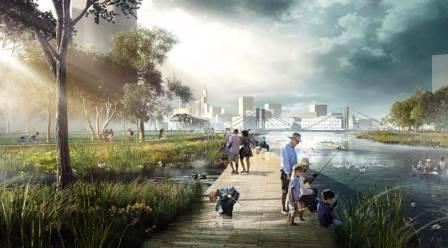 Designed to complement the new plan and Sterling Bay’s massive Lincoln Yards development, the North Branch Park and Nature Preserve envisions a signature park located within the former Planned Manufacturing District footprint to illustrate how adjacent environmentally-challenged and underutilized parcels can be assembled and transitioned into an amenity that elevates value for Lincoln Yards, serves Chicago residents, and enhances the ecology of the Chicago River.

"The North Branch Park and Nature Preserve provides everything urban open space should,” said Margaret Frisbie, Friends’ executive director. “The concept includes wonderful natural areas that will provide habitat instream and along the bank while reducing pollution to the river and creates a place for people from all over the city to play and enjoy the river. Recovering the riverfront is core to the Mayor’s vision and to do that we need to see this kind of design incorporated into every river-edge redevelopment project.”

The North Branch Park and Nature Preserve vision lays out ideas for a 24-acre public park along the east bank of the Chicago River between North Avenue, Cortland Street and Marcey Street. Advancing Mayor Rahm Emanuel’s vision for the vital role that the river plays in the economic vitality, health and well-being of the city, the park would contain recreation features, separated bike and pedestrian trails, connections to adjacent neighborhoods and transit, large natural areas and river edge treatments designed to improve river ecology.   Like Ping Tom Memorial Park, two miles south of the downtown the Park and Preserve would become a riverfront anchor two miles north.

Alliance partners include AIA-Chicago, ASLA-Illinois Chapter, Chicago Audubon Society, Friends of the Chicago River. Friends of the Parks, Illinois Ornithological Society, Openlands, and a host of neighborhood and community groups.