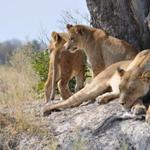 Chicago-based safari operator, Duffle & Compass, is pleased to announce a new river-focused expedition that combines a safari adventure to two of Zambia’s premiere wildlife destinations with the opportunity to travel with one of Chicago’s river experts, Friends of the Chicago River Executive Director Margaret Frisbie, as an escort. A privately guided safari limited to just eight travelers, the new Zambia Rivers Safari is scheduled for April 22 to May 1, 2016 and includes travel to the South Luangwa and the Lower Zambezi National Parks which are renowned for their wildlife and beautiful landscapes. 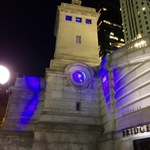 In commemoration of the 100th anniversary of the Eastland Disaster, Friends of the Chicago River commissioned The Suburban Piano Quartet for an original music composition to be premiered at the McCormick Bridgehouse & Chicago River Museum on Monday, October 19, 2015.  The unique piece will be composed for performance inside the five-story landmark bridgehouse on the Michigan Avenue Bridge at 376 N. Michigan Avenue, Chicago.

“The commission, titled Requiem in Water, takes its inspiration from the bodies of water in the Metro-Chicago area,” said Joanne So Young Dill, the Bridgehouse Museum’s director.  “The piece uses the classical form of the Requiem Mass as a point of departure to explore loss and redemption on the Chicago River and Lake Michigan in recognition of the tragic loss of the 844 people who were aboard the Eastland when it capsized.” 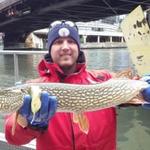 Although it might not make the front page of every newspaper or the 10 o'clock news, the animals that live in the Chicago River system had a BIG WIN this summer with new rules put in place to foster a healthier river system. The rules regarding the amounts of pollution allowed into the river system were tightened to improve aquatic conditions.

Among the about-time modifications are the requirements for more dissolved oxygen in the water and lower water temperatures from dischargers. These are key ingredients for a healthy ecosystem, and especially, healthy fish.

The New Chicago Riverwalk continues to engage and people across the country are starting to take notice. "It's an architectural, natural, and recreational adventure all is one," said Margaret Frisbie, excutive director Friends of the Chicago River. 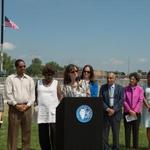 After 15 years effort Friends was cheering when the Metropolitan Water Reclamation District of Greater Chicago (MWRD) opened the new disinfection system at the Calumet Wastewater Treatment Plant this summer with a press conference and ribbon cutting to mark the occasion.

The event was attended by U.S. Senator Dick Durbin, USEPA Region 5 Administrator Susan Hedman, MWRD Commissioners, Friends' staff, and many others who worked long and hard to see this day come. The new facility uses chlorination/dechlorination to treat wastewater effluent from the plant which is discharged into the Little Calumet River. “This is really the next step toward swimming in the river,” said Margaret Frisbie, executive director of Friends of the Chicago River. 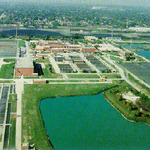 Don’t jump in yet but after more than a decade of advocacy, Friends is thrilled that starting today sewage effluent disinfection is online at the MWRD’s Calumet wastewater treatment plant to remove disease causing bacteria from its discharge.

“This is a historic moment for the Chicago/Calumet River System and one of the most significant water quality improvements in decades,” said Margaret Frisbie, Friends’ executive director, at this morning’s press conference with the MWRD and Senator Dick Durbin. “It will make the river safer for recreators and moves us closer to our ultimate goal of a river clean enough for swimming.” 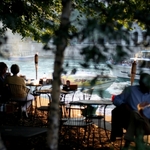 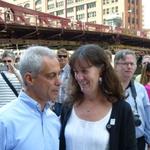 Friends' of the Chicago River was thrilled to join Chicago Mayor Rahm Emanual for the grand opening of the Phase 2 Chicago Riverwalk. Friends' founders called for a continous Chicago River trail when we were founded in 1979 and this charamatic section is key to the concept. 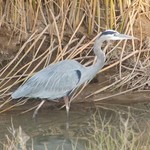 Just weeks after the US Army Corps of Engineers received hundreds of public comments in support of a 44 acre ecosystem restoration project at Bubbly Creek, they pulled the plug because of a perceived conflict with a potential remediation project happening nearby.