Bringing the River to Life 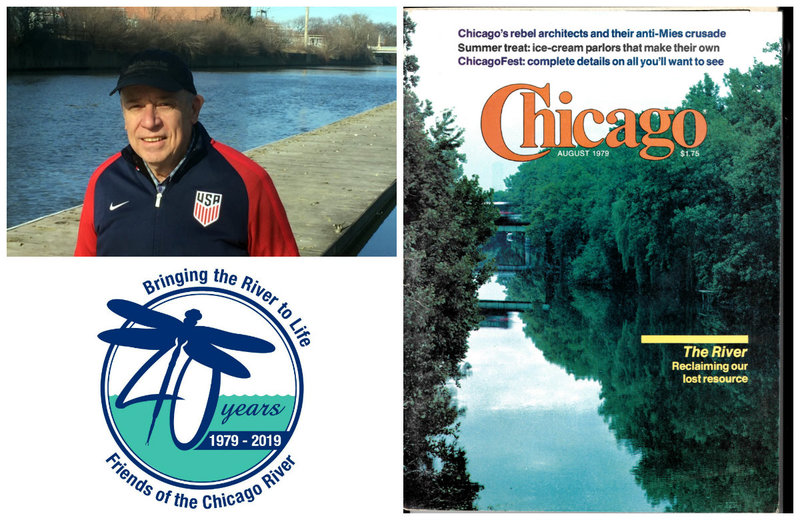 1. Robert Cassidy publishes “Our Friendless River,” which is the cover story of the August issue of Chicago magazine. So many people respond that in October 1979, with the help of Openlands, Cassidy schedules a public meeting and 130 people attend. Friends of the Chicago River is born.

2. The Joyce Foundation provides the first large donation to Friends which enables the fledging organization to begin seriously organizing and advocating for the river’s protection, leading to 40 years of progress towards a healthy and accessible Chicago River system.

3. Friends hosts the first Chicago River Weekend which includes the Revitalizing Chicago’s River conference. Chicago Mayor Jane  M. Byrne participates and calls for a “bold new plan” for the river and instructs the Chicago Department of Planning and Development to work with Friends.

4. The Chicago Tribune runs a pair of front page stories regarding the newfound interest in the Chicago River which gives Friends’ founder and first chair, Robert Cassidy, prominence and introduces the new organization and its mission to a broad audience. The story notes that there is a change in attitude about the river and that people are starting to view it as an underdeveloped recreational resource rather than a polluted nuisance.

5. Friends of the Chicago River hosts the second annual river design conference and identifies the need for river-edge tourist locations and infrastructure that would make the river accessible for recreation. These plans lay the foundation for a now universally desired continuous Chicago River Trail, the Chicago Riverwalk, and the first public canoe launches at River Park and Clark Park.

6. Organizing to protect the river for public access and open space, with the help of Illinois Attorney General Ty Fahner, Friends and Openlands successfully prevent a heliport from being built at Wolf Point. This effort establishes Friends as the voice of the Chicago River system and sets a precedent for public involvement in river-edge development.

7. The first legislation designed to guide development along the river system is created by Friends and the Chicago Department of Planning and Development and approved by the Chicago City Council. The new “Waterways Ordinance” stipulates 19 guidelines for progress including that access to water is a necessary component of new riverfront plans.

8. Friends of the Chicago River is among the recipients of $150,000 in federal funds to clean up the North Branch on the Chicago’s near north side. Over 20,000 yards of debris are removed, enough to bury a football field under 11 feet of trash.

9. Friends and the Chicago River Aquatic Center launch the Iron Ores Marathon, a 15-mile rowing race that starts in Evanston and ends at the Columbus Bridge downtown. Will Hart, 40, of Atlanta wins the event in 1:56:50. The goal is to get people out on the water and demonstrate the value of the river as a natural, recreational, and community asset.

10. Formerly housed as a project of Openlands and volunteer driven since 1979, Friends of the Chicago River incorporates as a stand alone 501(c)3 organization and hires Beth White, an urban planner and expert in public-private partnerships, as its first executive director.

11. Capitalizing on the previous river protection ordinances, the City of Chicago hosts a press conference to unveil the new Chicago River Urban Design Guidelines with Chicago Mayor Richard M. Daley and Friends’ executive director Beth White. David Mosena, then commissioner of the Department of Planning and Development, says “Friends of the Chicago River was invaluable in their ability to pull together varying interests and concerns… to achieve consensus on the Guidelines.”

12. Expanding on the success of Friends’ first volunteer river clean up in 1985, Friends of the Chicago River launches the first Chicago River Rescue Day (later Chicago River Day) with 25 people volunteering at Linne Woods. Volunteers pull shopping carts, picnic tables, mattresses, and bags of garbage from the river and its banks.

14. Determined to open the river up for recreation, Friends publishes the unofficial Paddling Guide to the Chicago River and starts to take people canoeing so that they can see the river’s magic and the help it needs. This leads to the creation of Friends’ formal Paddling Program in 1995 which enables tens of thousands of people to get out on the water and directly impacts improved water quality rules 16 years later.

15. Friends establishes the Chicago River Schools Network to provide K-12 teachers within the Chicago River watershed the tools they need to use the Chicago River system as a context for teaching about science and the environment. This offers their students the opportunity to explore the natural world that can be found in even the most urban settings. Since its inception, the CRSN has reached 400,000 students.

16. Illinois EPA funds the Lake County Stormwater Management Commission and Friends to develop a watershed plan for the 94-square mile North Branch subwatershed from Waukegan down to Morton Grove where the stormwater and sewage systems are separate. Known as the North Branch Watershed Project, the partnership promotes and supports on the ground stormwater projects that improve water quality, increase habitat, and educate the public leveraging millions of dollars in government funding.

18. Friends starts work with Lake Forest Openlands and the U.S. Forest Service to restore 2,000 feet of riverbank along the Middle Fork flowing through Mellody Farms in Lake Forest which improves water quality and creates habitat. Friends also partners with Gillette Co. and the City of North Chicago to create a stormwater detention basin to improve water quality in the headwaters of the Skokie River and reduce flooding downstream.

19. Friends and the Lathrop Homes Local Advisory Council inaugurate the Jimmy Thomas Nature Trail along the North Branch in Chicago. Improvements include a 600-foot nature trail, observation platform, canoe dock, and 16 beds of native plants. The project, which sets a natural area vision for future redevelopment, provides for wildlife and improves quality of life for the community.

20. The Civic Federation, Friends, and Openlands release their seminal study “Waterways for Our Future.” Findings include that the Metropolitan Water Reclamation District of Greater Chicago is the only major sewage agency in the country whose permits do not require the removal of harmful bacteria and pathogens from their discharge to the river system. The report triggers a five-year analysis by the Illinois EPA of how the waterway is, and could be, used and leads to the approval of new recreation standards which require disinfection.

21. Friends launches the Chicago River Flatwater Classic & Friendly Float, the first large-scale canoe and kayak race on the Chicago River. Running seven and a half miles from Clark Park to Ping Tom, the Flatwater attracts thousands of paddlers over its 10-year run and contributes to the successful approval of better water quality standards designed to protect recreators in, on, and along the water.

22. Friends and the Horner Park Advisory Council begin planning how to restore the banks of the Chicago River at Horner Park, laying the foundation for a half-mile riverbank restoration completed by the U.S. Army Corps of Engineers and the Chicago Park District in 2018. The $5.6 million project includes the removal of invasive plant species, regrading the shoreline to create a natural slope, and planting 128 native trees, 282 shrubs, and hundreds of flowers and forbs.

23. Working with the Illinois Department of Natural Resources, Friends identifies four dams along the North Branch that need to be removed to improve and connect aquatic habitat and increase paddler safety. Joining forces with then-Lt. Governor Pat Quinn who launches the Illinois Dam Removal Initiative in 2012, Friends begins advocating for dam removal and building a coalition of support. The Winnetka Road dam finally comes down in 2015.

24. Friends and Governor Pat Quinn host the inaugural Chicago River Summit to drive policy changes that improve the river system. At the Summit, Quinn announces a goal for the river to be fishable and swimmable by 2020. Future topics explore swimming, supporting urban wildlife, sewage pollution, and best practices for litter removal instream.

25. Friends’ Michigan Avenue Fish Hotel opens to great acclaim on the Main Stem of the Chicago River. Designed to demonstrate that it is feasible to construct places where fish can find food and shelter in an urban environment, the hotel garners international attention, wins many awards, and leads to the creation of The Jetty between Wells and Franklin on the Chicago Riverwalk downtown.

26. With a goal of engaging broad new audiences in the protection and improvement of the Chicago River system, Friends’ opens the McCormick Bridgehouse Museum & Chicago River. Located in the landmarked southwest tower of the DuSable Bridge at Michigan Avenue and Wacker Drive, the museum tells the story of the river’s transformation from a wild prairie stream to a sewage and ship canal to the living waterway it is today.

27. Friends’ launches the Chicago River Blue program to encourage and reward sustainable riverfront and watershed-wide development that protect people, water, and wildlife including bestowing the Blue Ribbon Awards. The first Blue Ribbon Award is given to Chicago Mayor Richard M. Daley for his commitment to river improvement and partnership with Friends.

29. After a decade of effort, Friends and its partners secure improved recreational water quality standards for the Chicago River system downstream of the North Branch Dam including protection for swimming and disinfection. The new standards are approved by the Illinois Pollution Control Board and USEPA and require sewage effluent discharged the river to be disinfected which improves ambient water quality dramatically.

30. Friends and Openlands release “Our Liquid Asset: The Economic Benefits of a Clean Chicago River,” an economic analysis which finds that for every $1 spent on clean water infrastructure and public open space there is a $1.70 return on investment from individual income, taxes, corporate revenue, and jobs.

32. Friends secures $175,000 to fund The Jetty habitat installation on the Chicago Riverwalk to improve habitat in the Main Stem of the Chicago River. Capitalizing on Friends’ design for the Fish Hotel, The Jetty includes floating wetlands, limnetic curtains, and fish lunkers that provide substrate for aquatic plants and insects which provide food sources for fish.

33. Friends and the Illinois Department of Natural Resources complete the pioneering installation of 400 channel catfish nesting cavities in the North Shore Channel, North Branch, and the Little Calumet River to improve reproductive success. The project is the first restoration project at this scale in the river system and includes the release of 277,000 channel catfish to jumpstart reproductive success.

34. Friends and the Environmental Law & Policy Center, Openlands Natural Resources Defense Council, and Illinois Chapter of the Sierra Club secure improved aquatic life water quality standards for the reaches of the Chicago River system downstream of the North Branch Dam governing dissolved oxygen, chlorides, and metals and other pollutants by Illinois Pollution Control Board and USEPA.

35. In order to address the continued problem of sewage and stormwater pollution in the river system, Friends launches Overflow Action Days. The program educates the public about how and when they should reduce their inputs to the river and builds awareness of the policy changes that need to occur to reduce and, ultimately, eliminate pollution.

36. Complementing Friends’ advocacy efforts to reduce the flow of garbage to the river, Friends launches the Litter Free North Shore Channel program and engages partners to help remove trash along the eight-mile canal. Participants include the City of Evanston, Evanston Ecology Center, and Shedd Aquarium. In 2019, Friends expands the project’s scope south to Chicago Avenue in Chicago, and changes the name to Litter Free Chicago River.

37. Scientists from the Forest Preserves of Cook County deem Friends’ turtle nesting habitat restoration project an immediate success when turtles at Chipilly Woods, one of five project sites, use a Friends’ cleared location in the first year it was restored. To date, over 100 acres have been cleared and 54 additional acres are in the works.

40. The U.S. Army Corps of Engineers, Metropolitan Water Reclamation District, and the Chicago Park District remove the North Branch Dam 16 years after Friends and Illinois Department of Natural Resources initially called for its removal. The project includes tearing down the dam, five acres of instream habitat restoration, and 14 acres of riverbank restoration.