Q & A with Robert Cassidy 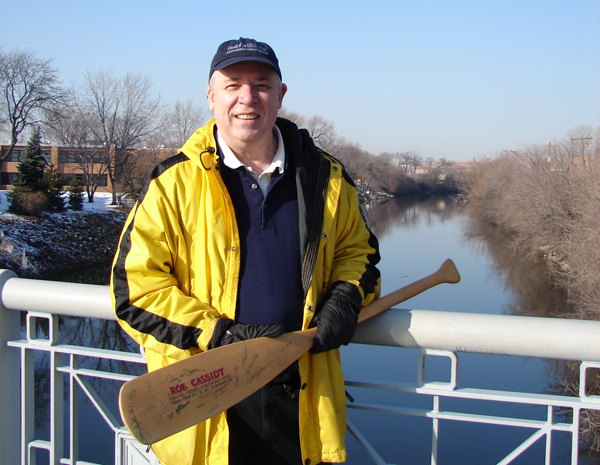 Friends of the Chicago River is celebrating its 40th anniversary, sparked by a piece written in Chicago magazine in 1979 “Our Friendless River” by journalist Robert Cassidy. In it, he detailed the degraded condition of the waterway, hinted at its potential, and developed a blueprint to make it happen. Cassidy recently sat down with Friends to recall those early days of the organization.

Q. How did the magazine piece come about?

A. I was freelancing at the time and I met with the editor there. He expressed some interest in doing something about the Chicago River and I said, great. I had just finished a book called Liveable Cities about neighborhood planning. My secret mission was to see if anything I wrote in the book would work with a civic organization that I might be involved in.

Q. The editor asked you to include a canoe trip down the river.

A. I wasn’t really that enthusiastic about doing it. I’m not really much of an outdoorsman. I’m a zero outdoorsman. He said you’ve got to do that and I said, “OK but you’ve got to let me have some space in the article for a discussion about what can be done about the river.” I didn’t want to do another article about how bad the river was.

Q. You went with the legendary Chicago River canoe guide Ralph Frese. What do you remember about that trip?

A. The smell.  The conditions were terrible that day. I think we actually passed a sewage overflow that was going on. There were branches clogging up everything. We had to get out of the canoe and do fording over things. It was pretty bad. Ralph did most of the paddling, thank God. I wasn’t expecting how much was going to be involved.

Q. Was his intent to show you the natural aspects or the terrible aspects of the river?

A. Both. We passed some turtles. There was a heron that took off in front of us. Now we have, what, more than 70 species of fish and sorts of other wildlife that have come back? It was not like that at the time. It was raw with sewage and had an unkempt look. It had become a dump for a lot of uses. There were some nice sections where homeowners had done their own landscaping and terra scaping. There were houseboats. But it was pretty rough.

Then, as we got downtown, things were opening up a little more but it was still unorganized and not very esthetic.

Q. What was your thought process as you were writing the Chicago magazine piece?

A. It was clear we had to get a civic group organized that was just focused on the river. Without that, we had no voice to advocate.  Without a dedicated group, it wasn’t going to go anyplace. The successful organizations in the city, like Friends of the Parks, they had positive impacts on things like the lakefront.

There were a lot of negative things going on: people were putting up chain link fences along the river and parking lots and all sorts of stuff which were just clearly violations of zoning rules and other things. And we needed some long range planning. I wouldn’t call the story I wrote a roadmap for what to do. It certainly wasn’t a Google map. It was a rough sketch.

Q. The story was in the August, 1979 edition of Chicago magazine. What was the reaction?

A. It was fast. The magazine came out at the end of July or early August and I was getting these phone calls within days of its appearance.  After about the 3rd or 4th phone call from people like Joanne Alter and Judith Stockdale, Bill Fredrickson and others, it was like, ‘OK. What do you want to do?’ We met at an old coffee shop, and I think there was seven or eight of us sitting around the table talking and they said, “You know we really need to do this Rob.” I said good. And they said,  “And you need to do it because we all have jobs. We all have responsibilities. And we all have conflicts.”

Joanne Alter clued me on a lot of stuff that was going on there, backgrounding. Judith Stockdale was really an incredible resource. She was the executive director of Openlands for many years. Bill Frederickson was at North Park College David Jones was a city planner. He was very dedicated. We had that first meeting and said “Let’s see if we got anything here. Let’s test it.”

Q. How did the meetng happen?

A. Judith set up this meeting at the IBM building  in October of ‘79. It was 12 noon to 1 o’clock meeting. I don’t even know how we got the word out. There was no social media. We had about 130 people there at noon with no offer of food. I gave a little introduction. I said, “Do we have something here? Do we want to pursue this?” And it was like ‘Oh, yea. That’s what we’re here for.’

So it was pretty amazing. There were definitely people there who had an environmental background or a civic background of some sort but there were also just people who said, “I’m looking for a group and this sounds kind of interesting. I’d like to be in on the beginning of something.”

Q. It launches and operates under the wing of Openlands.

A. Definitely. We needed that for tax purposes.

A. Oh yes. Right after I wrote the article and we had those meetings I took a very difficult job at a medical magazine. I needed to feed my family. The first couple years we barely held the organization together. The first year budget was like $37,000.

But on the other hand one year after operating we had this event, a Saturday at the IBM building, and we brought in people in, river and environmental experts from around the country, from different cities, and we had an all-day program. And Mayor Jane Byrne, newly elected, strolled in with her entourage and basically gave us a blessing: “I like what you’re doing. Keep going.” And that opened the door to the planning department.

And that’s where David Jones and I got particularly involved because we were both city planners. So we would meet with the two designated staff members periodically to start working on some sort of document. Those things started to come together in a year and a half. It was a technical planning document that gave guidelines on planned unit developments along the river and so forth. It was definitely a legitimate thing. It became embodied in the municipal code and required, among other things, a 30-foot setback for all developments. It was something.

There had been abuse. The owners of the Merchandise Mart, in order to get the Apparel Center built, had promised to landscape what is called Wolf Point. And they never did it. People were getting zoning relief and benefits, promising to do things along the river, and not doing what they promised. Of course, years later that turned around and the Mart people became very strong supporters of what we were doing.

Q. What was the mission those first few years?

A. Basically, can we hold this thing together and keep going and start building up some programs? So the early recreation programs started coming, canoeing, rowing and sculling on the river.  We started doing cleanups. We started talking with Lathrop Homes. We knew there needed to be an education component in the schools. We did not start that during my time. But we knew we needed that. Today, the stuff that Friends has done in education is just over the top. It’s incredible.

We started to set up an agenda, much bigger than what I had set up in my article. And geographically we knew it had to be bigger too. It had to include both the north into the suburbs and this huge part into the south to the Cal-Sag.

Q. What do you think the impact of Friends has been?

A. People started to see some improvement in the river and people with deep pockets came in and started building on it. Now you hear places advertised as “…With a magnificent view of the river.” Everybody wants a piece of the river in real estate, now.

It would have happened eventually. But what we did, I think, is we got it started a little bit faster just by bringing attention to the river and showing the possibilities and getting people excited about it.

The Architecture Foundation deserves credit for this, too. Those architecture tours really had a big impact on people. But I think we had some impact on moving things along more quickly.

Q. What do you think the next challenges for the Chicago River system are?

A. We have to aim high so we don’t fall back. We’re going to see a lot more development. We have to fight really strong to fight for a park component for Sterling Bay. One that’s really viable. The next frontier will probably be south. There’s so much valuable developable land. Not just high rises and commercial. It offers the opportunity for recreational development, open space development. There  are huge swaths of land that are available that can be developed in a positive way, creating nice community environments.

The larger picture for Friends is there’s another 40 years to keep going on. Keep being the watchdog.

Q. You sound amazed at what’s happened to the organization.

A. [Current Friends' executive director] Margaret Frisbie is always so generous, introducing me as “Here’s Rob, our founder.”  It’s embarrassing to me because we didn’t get a whole lot done in the first three years except to just get it started. So much of the work happened under the second executive director, Laurene Von Klan, and, of course, Margaret. The board is much more organized and powerful and energetic than anything we had. So I give all the credit to my wife who finally said, “It’s me or the river.” A lot of great people followed after I stepped away.

I’ve been making money at writing for 53 years, since I was 19 years old and a reporter at a newspaper on Long Island. I’ve written somewhere around three and four million words, maybe five million. There’s very few times you get any kind of feedback that anything you’ve done has had an impact. You write stuff and you go on to the next thing. You don’t expect to get the phone call saying, we like this idea. What are we going to do about it?