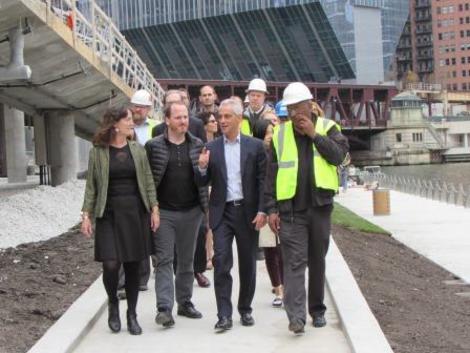 Friends' executive director, Margaret Frisbie was recently named a 2017 River Hero by the national advocacy group, River Network, which recognized five leaders from the river and water conservation community for their exceptional personal and professional achievements in support of river and water protection and restoration.

“As a voice for the river, she has made a difference in its health and vitality and laid a strong foundation for restoring its former natural glory. Her knowledge, innovation, and commitment to making the Chicago River one of the world’s greatest rivers have undoubtedly contributed to its renaissance and recovery.” Passionate about protecting and restoring the health and vitality of urban communities both for people and wildlife, at present Frisbie serves as secretary for the board of Friends of the Forest Preserves and on the Great Rivers Chicago Leadership and Implementation Committee. In 2010, the Harvard Business School Club of Chicago named Frisbie as a Roman Nomitch Fellow."

River Network has recognized 78 individuals from the U.S. and beyond with the prestigious River Hero award since 2002. This annual award is unique within the conservation community given its focus on water, local champions, and peer recognition. Each candidate must be nominated by those they work with who attest to their transformative work on a particular river or geography. Letters of support from community members, local elected representatives, governors, members of congress, and national conservation leaders make final decisions very difficult.

All too frequently, individuals and groups involved with natural resource conservation fail to celebrate their hard-won successes. Too often, important victories are allowed to be overshadowed by the next issue or threat. Challenges always lie ahead, but we need to take time each year to celebrate our achievements and the people who make them possible. River Network created the River Heroes Award in 2001 to recognize and celebrate people whose efforts to protect and restore their local waters have been extraordinary in scope, scale, impact and heart.

We are so very proud of Margaret's tireless work, passion, and boundless spirit for the Chicago River.